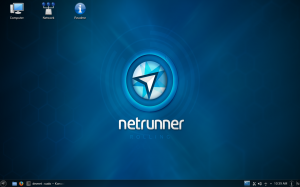 In my quest to find a professional and polished distribution of Linux that used KDE as the default desktop…I tried out quite a few flavors:  Kubuntu, Salix, Manjaro, PCLinuxOS and even OpenSuse.  All done in the past few weeks.

Each time I installed these distributions on this Dell Latitude D630 I pretended I had no idea how Linux was supposed to work.  I’d step through like a less than technical person would do.  How do I connect to wireless?  Is it easy?  Can I stream Youtube videos?  Will my mp3 collection play?  How do I manage that mp3 collection?  Will DVD’s play?  Do things ‘just work’ out of the gate?

I blogged about the beginning step in Manjaro Linux…it wasn’t as polished as I’d like.  I jumped next to Salix and found that Wicd, the default network manager…makes you jump through 9 different hoops to connect to a hidden network.  PCLinuxOS came next but it was so slow on this laptop that it lasted less than a day.  OpenSuse repeated the PCLinuxOS slowness.  Kubuntu was last and it was fine and polished…but once again, slow…random hangups when doing things like file browsing/web browsing.  Kubuntu was the closest I came to a great KDE flavored distribution…it stayed on the laptop for a couple of days.  So the question remained:  Can the distribution I am running be considered professional and polished while getting out of the way

The majority answer for most of these distributions is a resounding “NO”.

One distribution however, stood above the rest of them.  Instead of stopping on one of the above questions…I found myself having to create new and more intricate ones.  This distribution wasn’t holding me up…it was pressing me forward.  THAT is what a distribution of Linux should do.  It should be out of the way and allow you to get on with your business.  The distribution that does this the best out of that handful mentioned above is Netrunner.

I have an old Dell D630 Laptop which was a standard business line laptop from Dell circa 2007 or so.  It’s got an Intel Centrino and I loaded it up with 4 GB of RAM.  It has a 40 GB Hard drive in it and an Nvidia Quadro graphics card.  Overall, nothing special.  It’s very Linux friendly overall and I’ve used numerous distributions on this laptop since I picked it up at a liquidation sale. 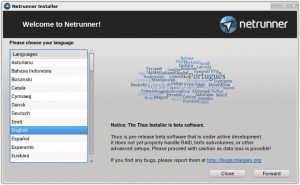 Netrunner uses the Manjaro installer.  Manjaro is based on Arch Linux.  Normally when people think of Arch Linux, they think of a very technical distribution that is only for the Linux elite.  The installer for Netrunner shuns the idea that you need to speak binary to install it.  Simple choices are laid out for you…I was able to encrypt my hard drive and didn’t need to know how to partition anything to get it moving.  The wizard was, simply put, phenomenal.  It was a well put together and excellent installer.

Day to Day Use

I’ve found Netrunner to really and truly be out of my way.  I don’t have to think to use it.  I open up music and play it.  I watch movies with no issues.  I browse Youtube videos without a thought.  Flash video just works.  When I pop in a USB Drive, it detects and mounts like I’d expect it to.  Overall, the operating system gets out of my way.  I normally use Openbox for my Linux laptop and I’ve actually gotten used to using KDE because of how polished Netrunner rolling is.

One of my favorite things about Netrunner rolling was Octopi, the graphical front end for pacman.  This tool allows you to manage all the packages on your system and to search out new ones.  It also allows you to manage AUR packages as well.  While this might not be something the average user would dive into right away…having been an Arch and Manjaro user before…I found it fantastic to have a “one stop shopping” experience via Octopi.

The overall speed of the distribution is fantastic.  I found none of the slowness that plagued the laptop during the testing of other distributions.  Things were quick and crisp when opening.  The only time I experienced slowness was when I had about 15 browser tabs open and was trying to open GIMP (I also had KDE Telepathy, Konversation, and dolphin open in the background).  Overall, I’ve found the speed quite acceptable.

My overall conclusion with Netrunner Rolling is that there is no better Arch platformed Linux distro with KDE as the default environment out there.  It just works.  It gets out of the way and it gives the end user a clean, crisp and efficient desktop right out of the gate.  You don’t have to know binary to get it installed, updated, and running.  You don’t have to sacrifice a goat to Cthulhu (I’ve heard that comes later?) to have a pleasing KDE experience for your desktop.  I keep saying this, but it just works.

I found it really odd that I hadn’t heard very much about Netrunner in the past but I readily admit that I hadn’t kept up with KDE based distributions in the past few years due to my fascination with Openbox.  Netrunner has won me over though…I will definitely be paying attention to this fine distribution in the future as it has taken its place as the top KDE distribution I’ve ever tried.  I hope you’ll give it a try in the future (if you haven’t already) and kudos the developers and community of Netrunner!