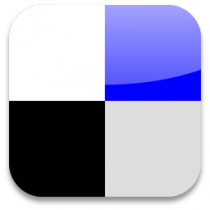 So today, bookmarks posted from delicious.com onto the Yet Another Linux Blog RSS feed.  This isn’t normal…I don’t post bookmarks from that service here…in fact, I haven’t used them since they were bought out.  I remember experimenting with bookmarks posting to your blog for the first month I had my delicious account…but never kept it on.

But suddenly, somebody’s bookmarks post and show up in the RSS feed here.  For that, I apologize to my RSS readers.  Rest assured, it shouldn’t happen again as I’ve deleted my delicious account. 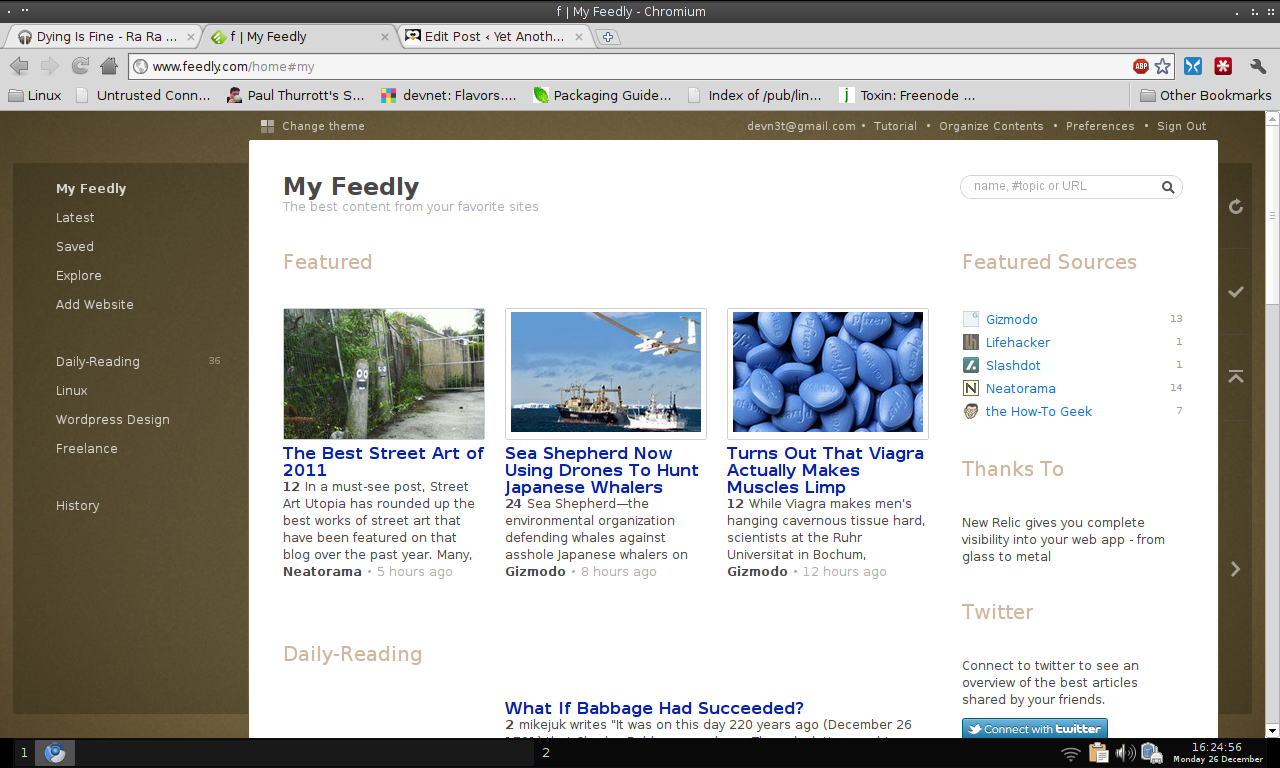 How many of you use Google Chrome or Chromium and have more than 10 active feeds in Google Reader?  I’m sure that most of you raised your hand…well, maybe not physically but a mental raising of the hand I suppose.  How about 20+ feeds?  30+?  Is your (virtual) hand still up?  Mine is.

I’m plugged in…maybe too plugged in.  The “mark all items read” button received much use in my RSS reader.  I found myself skipping more than I actually read.  Google reader is awesome, don’t get me wrong, but it is a bit simplistic and plain…which is fine, it does its job well.  I’m informed.  But I often times find myself trying to sift through the cruft that is my various feeds.  I have wordpress design feeds, freelance feeds, Linux feeds, sports feeds, business feeds, inspirational feeds, youtube feeds, feeds about feeds, and feeds feeding those feeds.

I wanted to get more from my news/RSS.  Enter Feedly.  Feedly is a way that my feeds become VISUAL.  Instead of line by line by line, I’m given tiles and mosaic patchworks in an easy to read format.  I have variety.  I have images.  I have screenshots.  I have thumbnails.  I can see my feeds.  I can see what they’re describing.  I can see what people are blogging about.  I started using Feedly a mere 4 days ago and I have completely caught up on my reading.  Before I started I had over 3000 articles and was many, many days behind on my reading.  I’m completely caught up now with a manageable 200  articles to read.

Does this mean I’m reading thousands of articles with Feedly?  Not by a long shot.  But I’m finding what is important to me faster and thus being much more efficient.  I’m still skipping many articles…but at least now I know WHAT I’m skipping.  I’m not just marking all read so that I can catch up.  Feedly allows me to peruse my feeds in almost a catalog fashion which speeds up my reading times and focuses my attention on the things that catch my eye.

Feedly is free by the way.  I use it with Chromium/Chrom (works with any web browser though, just head over to their website) and you can too.  Install it as a web application in the Chrome web store.  Once installed, synchronize it with your Google Reader account…things you mark as read in Feedly will be marked read in your Google Reader account and vice versa.  I also use it on my Android tablet.  Make sure to check out the settings page in Feedly to configure the right layout and colors for yourself to make things easier to read and fit your workflow.  I guarantee you will find yourself reading more interesting articles…bookmarking links more…and paying attention to what matters to you.

Thanks for making Yet Another Linux Blog one of the top Linux Blogs on the planet!  It was an average day over 8 years ago that I began to host my own blog at linuxblog.sytes.net (thanks No-Ip.com!) on a PII that I inherited from one of my friends.  Slackware Linux hosted the project then and I wanted to use my new blog to explore the Linux world posting tips, tricks, and how-to’s on my way.  Millions upon millions of pageviews and 6 hosting changes later, we arrive here…at the end of 2011.

So am I throwing in the towel since I didn’t post regularly in 2011?  Heck no.  I’m going to continue learning and posting, exploring and writing.  In fact, I’ve made it a resolution to do more posting this year than I ever have to develop my writing as I begin to supplement my technical writing portfolio.  Technical Writing would be my profession of choice if this were a perfect world…getting paid to help people is something I find very satisfying.  For now, I freelance and am looking to possibly make freelancing become my full time job.

Which distribution is the RIGHT distribution?  Is there such a thing?  When you start your journey with Linux you might here something like this:

Here’s the thing…statements like these are all BLATANTLY FALSE.  Why?  Because they’re opinions..everyone has one and they are all just that…opinions.

When you start your journey with Linux, don’t let someone else tell you what you should or shouldn’t use.  Go out and find what fits you like a glove and use that.  It doesn’t matter how large of community the distribution has (unless that is what you’re specifically looking for) or how often it updates or how many hits it has on the Distrowatch tracker.  Use what is best FOR YOU.  Only you can decide what distribution scratches whatever itch you have.

If you choose the right one, chances are you’ll be a part of that distribution for a long time.  But don’t worry, it isn’t like Indiana Jones and the Last Crusade and if you pick the wrong distribution you won’t turn into a dusty exploding skeleton.  In this situation, the RIGHT distribution of Linux is ANY distribution of Linux.  As long as you’re making a conscious effort to choose free software and use Linux, you win.

If Small Distributions Never Were…

As an example:  Symphony OS.  It used FVWM and Mezzo for the desktop experience and it REVOLUTIONIZED the way we see and interact with files.  If you use Gnome 3, Ubuntu Unity, or KDE 4.X, you’re using concepts that Symphony OS was the first to put onto a Linux desktop.  Symphony never had a huge user base.  It never shot up the charts at Distrowatch.  It did however, push the envelope of what a desktop distribution can and can’t do.  It did push the boundaries of design.  It did push simplicity and usability to a new level.  It also did web apps before webapps were cool.  Somehow it never caught on…but I it influenced people and challenged people to push the envelope of what was possible and impossible with desktop Linux.

Often times I have found Linux users looking for a distribution that fills a specific function.  “I just want a file sharing distribution” they’ll say, or perhaps “I just want a nice and simple desktop”, or maybe even “I just want a tight firewall”.  The beauty of open source software and Linux is that you’ll find small, niche distributions that fit the bill for all of those needs and when you use these distributions, you’ll continue to learn about Linux…and perhaps you’ll push the envelope of what is possible and not possible just like Symphony OS did.

Regardless if you choose small or large distributions, you win.  The fact is you CHOSE and weren’t force fed something by system installers and companies who think they know what is best for you.

We CAN All Get Along

Many times when we pick the flavor of Linux we like, we identify with its goals…the direction its heading…maybe even the direction the community champions.  There isn’t anything wrong with this.  The next time you experience passionate supporters of Linux, keep in mind that neither you nor they are the enemy.  If you both use Linux and open source, you both win.  Small, large,  and niche distributions of Linux operate harmoniously together and build off one another…it’s one of the unseen benefits of Linux and open source.  Beauty and power in simplicity through collaboration.  Congratulate yourself every single day for choosing Linux!

I’ve been slowly collecting a few commands that are useful to me for various things while using Linux.  I figured that I would share some of these handy commands.  In no particular order, they are:

To copy, preserving permissions AND structure AND recursively, from a remote system to your local system:

To remove all files matching a certain extension (xml in my example) in a directory:

To go into a location, find all files that match a certain extension (jpg in my example) and move them to a different directory:

To recursively remove empty directory from the directory you are currently in (your pwd):

These are a few of the commands that I’ve found useful in the past few weeks.  I hope you find them useful as well.  I’ll be test driving quite a few different distributions and reporting back what I find as well as experimenting with various different commands…I really like find because it is so powerful so look for some more posts with uses of the find command.  Thanks for reading and sorry for my lapse in posting this past month!

Radio Tray is a very simple application that plays your favourite radio stations and it does so from the system tray, meaning any station you want to listen to is only two clicks away. Naturally you’ll need to add your favorite streams to this program before it will actually be useful. Most websites offering streaming will give you access to a “.pls” file. Copy the link to this file and you can add it to Radio Tray. It supports most media formats as well as PLS, M3U, ASX, WAX and WVX playlist format. You can even bookmark the stations you really like for easy access, which is pretty nice too. To install Radio Tray in Ubuntu Linux, launch Ubuntu Software Center from Applications menu (at the top) and search for “Radio Tray”. From the results, select “Install” and you are all set to use this amazing piece of software.

Radio Tray can be launched from “Sound & Video” menu under “Applications”. It will appear in the system tray area. This is the beauty of this software that as it runs in system tray so it does not consumes much system resources as it does not require any browser window or any other heavy application to function. Radio Tray will launch in system tray and will not automatically play any station. To play the radio station, click on the Radio Tray (tray) icon and select the station from drop down list (you may require extra plugins for proper functioning of the application e.g gstream libraries).

Perhaps the pre-configured radio stations may not interest you. You can not only add your favourite channels but even Remove or Edit any existing channel. To Add/Remove channel(s) in Radio Tray, Right Click on the tray icon and Select “Configure radios…”. A dialogue box will appear. Here you can Add new channels, Remove or Edit existing channels and Move the Channels UP or Down in the list. Lets, now add a radio station to Radio Tray. Go to: http://www.shoutcast.com/ and search for some radio station (say, rock). From the results, just copy the link of any radio station. Now come back to “Configure Radios” and Click on “Add” Button. In the “Radio name” box enter any friendly name (say Soft Rock) of the radio station while in the “URL” paste the link of the radio station.

Your new radio station is now added into the channel lists of Radio Tray and you can listen to it just by selecting it from the drop down list of Radio Tray.

If your favorite station doesn’t have a standard M3U or PLS playlist posted on their web site, you can always find the stream’s URL by other means. Radio Tray isn’t incredibly feature-filled, but on those occasions you just need a simple unitasker, it’s perfect for getting the job done and staying out of your way. Its a perfect substitute for proprietary radio softwares and not only available in .deb format but also in source format.